LMR Drilling has already carried out controlled horizontal drilling in Italy in the past. In 2009, for example, a DN400 gas pipeline was successfully laid under the River Po for the same client. Also this year, the client ordered a horizontal well under the river Po for a planned export pipeline of his refinery.

The special challenge of the current project was not only to cross under the river Po, but also a nature reserve upstream of the river. Through this nature reserve on the border of the Italian regions of Piedmont and Lombardy, the total drilling length was thus 1,700m.

Special attention was paid to the prevention of drilling mud eruptions. These occur when the drilling fluid used in a controlled horizontal drilling operation cannot flow back unhindered via a free annular space from the drill bit to the entry point. For example, if the annulus is narrowed or blocked, the pressure of the drilling mud increases, which then leads to a „blow-out” i. e. the escape of drilling mud at the surface.

To avoid this consistently was not only for the client but also for LMR the highest priority. Strict drilling and drilling mud parameters were specified for this well. These were based in part on a previously conducted soil survey and simulated the maximum permissible drilling mud pressures at various locations of the well. As a result, LMR proposed and used the „meeting-in-the-middle” procedure. With this method, two horizontal drilling rigs drill towards each other, with the holes meeting in the middle. One drilling rig is located at the planned entry point, another one at the planned exit point. When the drill heads approach a certain radius, the radar intersect systems used in the borehole set communicate with each other, so that the respective position in relation to the other drill head can be precisely determined by borehole surveyors. With this positioning information a fast and seamless connection between the two boreholes can be established.

Due to the high performance of the two drilling columns, only 13 days passed between the start of the pilot drillings and the successful installation of the product pipe. The quite long sunny days with temperatures above 30°C in September of this year benefited above all the hybrid generator used. This stores electricity generated by photovoltaic modules in a battery storage unit, which was then used to supply the workshop and crew containers with environmentally friendly electricity. 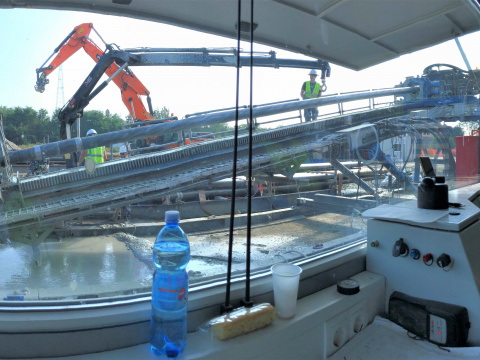 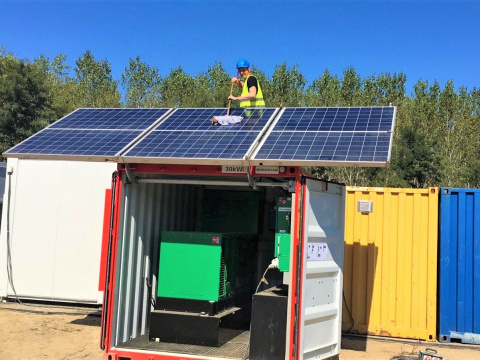