The Hallesche Wasser and Stadtwirtschaft GmbH (HWS) planned the replacement of the drinking water supply line DN 400 through natural protected wetlands nearby the city of Halle (Saale). The planned route passes under two streams, a flooding area and drinking water protection area. Furthermore, the entire planning area lies in a nature reserve which is also classified as European bird sanctuary and landscape protection area.
In the preliminary planning, different variants of the construction works and pipeline routes were examined and evaluated. This happened in cooperation with the client HWS, the responsible licensing authorities and the commissioned engineering office BEWATEC GmbH.
The laying of the approximately 1,700 m long section crossing the protected areas by means of HDD (Horizontal Directional Drilling) was selected as the preferred variant by all involved parties.
In the various planning phases, construction details were agreed in consultation with the approval authorities. During the pre-construction phase, the focus was put on the environmental aspect. Considering the requirements of the approval authorities, a drill profile for the construction phase was determined and a public tender was carried out.

The tender was won by the company Brochier Rohrleitungsbau Nürnberg GmbH which awarded the HDD works to LMR Drilling GmbH. As part of the detailed planning phase, additional ground investigations and evaluations regarding the chemical and soil mechanical properties were carried out. Detailed knowledge about the subsurface is key for choosing the most suitable drilling tools and drilling fluid. After the evaluation of the additional ground investigation a new, optimized drilling profile was designed. The new drilling profile was improved with the help of all involved mostly in more homogenous soil conditions. Following the evaluation of the supplementary subsoil survey and considering the execution of the HDD in more homogenous soil conditions, the drilling profile was optimized by LMR with the help of all parties concerned.

As a leading geological expert, Dr. Ing. Donié got involved in the preparation of the additional ground investigation and evaluation report.
The planning of the drilling fluid was carried out in close cooperation with the company HEADS as supplier of the drilling fluid, the geological expert Dr. Ing. Donié and BEWATEC as the Client’s representative.
The new, optimized drilling programme, which focused on the highest possible operational success regarding the soil conditions, was discussed and agreed on with the Client and the planning office.
In week 42, the mobilization of the HDD construction site began. This was followed by the installation of a protective casing pipe DN 600. The aim was to protect the entry section of the HDD from uncontrolled breakouts of drilling mud as the entry section lies in a marshy area that is characterized by soft soils. After the casing pipe was set, the pilot drilling started. Due to the very dense, swellable clays, a drilling motor with a particularly large pilot drill bit was used in combination with drilling mud specifically adapted to the subsoil conditions. A gyro compass system from the company Drillguide was used for the borehole measurement and guidance, as the surfaces along the drill route was mostly inaccessible.

The pilot drilling quickly proved to be a major challenge. Notwithstanding the results of the detailed ground investigations, the upcoming soils of the first 400 m of the pilot bore were found to be very soft, making oriented drilling with the drill motor and large drill bit difficult. In the further course of the pilot drilling, there was repeatedly insufficient return flow of drilling fluid, which could each be successfully countered with an immediate adjustment of the drilling and drilling fluids program. Thus, drilling fluid losses and uncontrolled breakouts of drilling fluid could be avoided. The initially uncovered dense clays were encountered later in the pilot drilling and resulted in a significant decrease in drilling progress. From drilling station MD 1500 m, the backflow of the drilling fluid decreased to the rig site. Despite all efforts, the backflow could not be maintained. Thus, the last 100 metres of the drill length were drilled with great care and no return flow of drilling fluid to rig site. Due to the skill of the Drill crew and the careful arrangement of the exit side, this was completed without uncontrolled drilling fluid breakouts on surface. On November 3rd, the peg at the exit point was hit spot on with the drill bit at 18:45 hrs.
The pilot drill data was always accessible to the Client and was also transmitted daily to the Client for inspection. The pilot hole was successfully completed so that reaming of the borehole could begin right after.
The enlargement of the borehole was carried out oppressively. This was possible with special drill pipes that only LMR owns. This enabled a continuous backflow of the drilling fluid to the drilling rig. With this procedure a complicated and in the ecological balance disadvantageous transport of the drilling fluid from the exit point to the entry point via vacuum trucks was avoided. Subsequently, with the knowledge of the pilot drilling and after consultation with the Client and BEWATEC, the drill- and drilling fluids program for expanding the borehole was adjusted. Within a week, the borehole could be widened to the final diameter.
The widening of the borehole was followed by a combined cleaning-run and check-trip. The objective was to ensure that this very long borehole is clean, free of obstacles and ready for the pullback of the product pipe.
The pipe pulling procedure then started in the early morning of November 11th. It was due to the topographical conditions that 3 pre-aligned partial strands of the product steel pipeline with a length of approx. 580 m each had to be pulled in. The overbend construction was planned for this entry so that it could be welded with little effort in the ridge of the overbend. A special ballast system for the pipe segments was developed by Brochier and LMR. This had the advantage that the welders, inspectors and pipe insulators had such a dry spot in the otherwise very wet terrain. Due to the excellent quality of the borehole, the pullback of the product pipe could be completed without any particularities in the early morning of November 13th. Maximum pull-in forces were < 30 to when tightening the individual pipe segments after the interruptions that were due to the connection of the pre-aligned partial strands of the product pipeline. 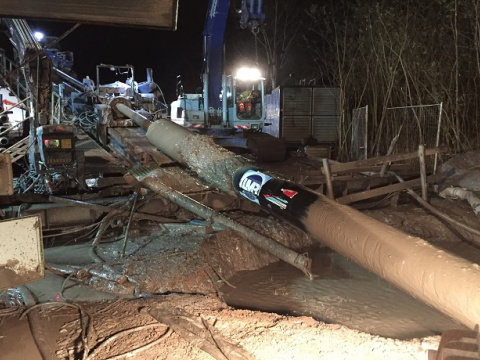 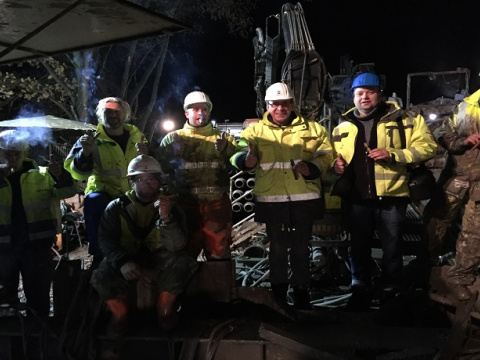 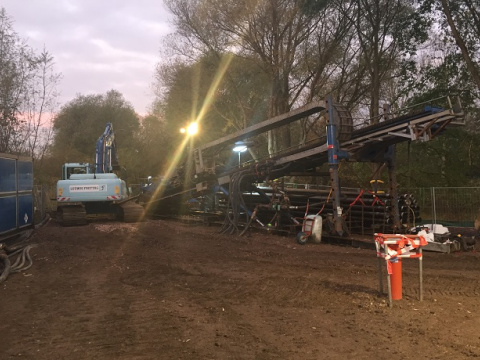