With this article we present the construction project landing structures BorWin4 and DolWin4. Ludwig Freytag GmbH & Co KG carried out this measure this summer. In doing so, we will follow the below structure as part of the presentation of the measures:

Amprion GmbH, based in Dortmund, is a German power transmission system operator. The company operates the second largest extra-high-voltage power grid in Germany with a circuit length of almost 11,000 km. Against the background of the expansion of offshore wind energy in the German Bight, Amprion has been implementing offshore grid connection systems for connecting offshore wind farms to the transmission grid for the first time since 2019 with the DolWin4 and BorWin4 projects. The corridor already used by TenneT via Norderney and through the Wadden Sea is used to bring offshore wind energy to the mainland and finally feed it in at the Hanekenfähr substation near Lingen.

The cable systems of DolWin4 and BorWin4 each consist of two power cables and one fibre optic cable. A cable conduit system is provided for each energy cable, so that a total of 12 cable protection pipe systems are installed over a total of 3 years for the closed crossing of the dunes on Norderney and Hilgenriedersiel. Work is being carried out from north to south, also to avoid ongoing shallow water cable installation work by other transmission system operators in the rear-side watts.

From the planning specifications and a close consultation with owners, tenants and specialist authorities, a tender emerged, which came on the market in April 2021 and, in the perception of the general contractor commissioned in September 2021, Ludwig Freytag GmbH & Co. KG, fortunately also led to the commissioning.

The order to be executed provides that Ludwig Freytag GmbH & Co.KG (LF), represented by the three following subsidiaries, will carry out the cable protection pipe structures to accommodate the future energy cable systems under the dunes and within the meaning of a turnkey contract:

Of fundamental importance is the full compliance with extensive requirements from the coastal, environmental and nature conservation as well as the observance of concerns of the local residents. The scope of these restrictions is considerable and shows a clear influence on the execution of the work.

Part of the work for the first construction phase “Norderney-North” for the crossing of the dunes on Norderney shown here was that, subject to a permit pending at the time of the award of the contract, the construction site should be prepared in January 2022 and the actual execution of the work should take place in the period from 15th July 2022 to 15th September 2022. This time window in the summer is extremely short under the premise that earthworks, pipe construction, hydraulic engineering and HDD work take place and must be coordinated. Against this background, a complex mixture of requirements and demanding logistics must be mastered. Summarised: “simple is different”!

Upon receipt of the award of the contract, a project team from the various departments of LF was immediately activated. In close cooperation with representatives of Amprion, the preparation of the surface area for January 2022 was first prepared.

The surface preparation, consisting of a clearing of bushes, the removal of roots, the removal and interim storage of topsoil, the relocation of a topsoil rent and the ballast of a part of the future drilling site worked well.

The open and honest approach of all those involved in this sub-measure contributed significantly to the success.

This first step was followed by the creation of the execution concept for the earthworks, pipe construction, marine works engineering and HDD work. Extensive documents were created, exchanged, checked, revised and, after approval by the Client, Amprion, fed into the data exchange system. This process of data exchange was not always free of problems, especially taking into account a hacker attack on the LF Group. However, all planning documents and documents could be provided within the agreed time. The execution concept was then presented to the responsible approval authorities together with Amprion in June 2022. This date was promptly followed by the official approval of the commissioned work: the construction of the cable conduit systems.

At the same time, the corresponding work to be carried out was prepared in the individual departments. Detailed engineering took place, in particular, pipe and hydraulic engineering, as well as in the field of HDD.

Essentially, this engineering was aimed at process optimization with the aim of minimizing as many influences as possible on the environment and the residents in the construction site area. Various approaches for welding solutions, sound insulation measures, transport solutions of all kinds and a further development of drilling methods have been developed.

The spring storms are known to be accompanied by significant surface erosion on the north coast of the island of Norderney. This resulted in the realisation in July that the north beach in the area of the exit points of the boreholes had a significantly changed altitude. This knowledge was shared with Amprion and a concept for reducing the corresponding flood risks was jointly developed.

Bearing in mind that 2 large drilling rigs (tensile force ≥ 250 tons) were to be used simultaneously for this measure in order to better control the narrow time window, extensive detailed planning had to be carried out for all phases of horizontal drilling. In retrospect, it cannot be seen that significant synergy effects could be achieved in the process. Anyway, the time spent preparing for work was used effectively. The challenge was global supply bottlenecks resulting from the COVID-19 pandemic and the Ukraine conflict. With some improvisational skills, however, these challenges could be solved.

Looking back, the long work preparation has paid off.

Initially, a logistics base was set up in the port of Norddeich.

This was followed by the establishment of a welding site at the southwestern end of the island of Norderney. This was accompanied by the delivery of 4,400 linear metres of cable protection pipe, which was welded there in several sub-strands.

While the drilling site was being set up, the welding work began. The welding place was in the area of a meadow heavily frequented, particularly by dog owners. Careful training and sensitisation of the employees working there and a comprehensive risk analysis, which was carried out together with Amprion and the city of Norderney, allowed work to be carried out without endangering and impairing third parties. The consistently positive response and the great interest in the construction work surprised even the local construction management.

Several pipe strings were prefabricated in the shortest possible time in compliance with all DVGW rules. These were then towed within a few days, to the north beach, with a ship in the area of the beach construction site (= the exit points of the boreholes), pulled with the help of existing technical aids on the beach and temporarily stored there until the pipe feed.

During the towing processes of the sub-strings, the drilling work was already in progress, so that the pipes could be coupled and retracted in time with the completion of the borehole.
The drilling process was continuously optimised, so that it was possible to accelerate the drilling work and achieve an ever-enhanced borehole quality. Innovative drilling tools and drilling methods, developed by LMR, were used.

All boreholes were drilled with pinpoint and position accuracy to the great satisfaction of Amprion. Multiple drilling of the drill line for course correction was not required at any time. A great help was the adapted drilling line planning of the HDD entrepreneur and the use of their own, very experienced drill rig operators. The great fear that blowouts would occur in the area of the highly sensitive dunes or inadmissible inaccuracies during drilling could be eliminated with the help of the newly designed drilling tools and drilling methods.

To the great satisfaction of all parties involved in this project, it was thus possible to complete the drilling work within the planned time and in this respect to implement the minimisation approach for interventions in the Wadden Sea National Park in a very significant way.

With the completion of the 2nd borehole of the individual cable conduit systems, the dismantling of the drilling site began. It will be used again in 2023 for drilling into the rearside mudflats. The advantage resulting from the acceleration of the drilling work was also used in the dismantling and could even be improved. The sum of the return transportation was a logistical achievement. Here again, the relatively long time that Amprion had allowed the Contractor for work preparation paid off.

Already during the work preparation, a special focus was placed on recycling instead of disposal of drilling fluid and drill bit. Accordingly, so-called high-end recycling layers were used for solid-liquid separation to separate the drilled soil from the drilling fluid.

The drilling fluid was reused as much as possible, which reduced both the costs and the ecological footprint.

In cooperation with the competent authorities, possibilities were also identified to reduce the ecological footprint regarding the drilled soil (drill bit) and thus to put it to further use, instead of disposing of the drill bit as waste, as is usually the case.

Samples taken from an independent and accredited laboratory at the start of drilling did not yield unexpected readings, so nothing stood in the way of reusing the drill bit.

The removal of the drilling fluid and the drilled solids could be implemented successfully and in accordance with the contract. It was possible to achieve a reduction in areas and CO2 emissions associated with collection and disposal.

Due to the rapid drilling progress, correspondingly large quantities of drilling fluid had to be driven off site per day. This process was constantly optimised during the works, with great success.

The construction project was accompanied professionally and objectively by specialists for occupational safety, ecologists, soil scientists and HDD specialists. The scope of the requirements and the associated documentation obligation requires a corresponding staff of supervisory staff. As shown above, the handling in the work preparation was open and honest. There was an open exchange of wishes and ideas at eye level. The often delicate cliff “expectation” could be mastered harmoniously by internalising tasks, communication channels and responsibilities at an early stage by all those involved. This resulted in productive cooperation, both on and off the construction site.

The work for the cable conduit systems in 2022 was carried out to the full satisfaction of Amprion and the approval authorities. Intensive work preparation, the good and open exchange with Amprion and the approval authorities and the associated procedural and process optimisations were the key to success, so that the work was completed well ahead of schedule and the CO2 footprint of this measure was significantly reduced.

In this context, a quote from the construction supervision HDD: “We congratulate Ludwig Freytag GmbH on the successful implementation of the work this year. As part of a large project team, we are proud to have made a small contribution to the success. The Moll-PRD has accompanied the Norderney Corridor since 2007. It is remarkable that even after 15 years of experience in the location, such optimisations have still been achieved in the process through innovative ideas.”

We look forward to continuing the construction project next summer 😉. 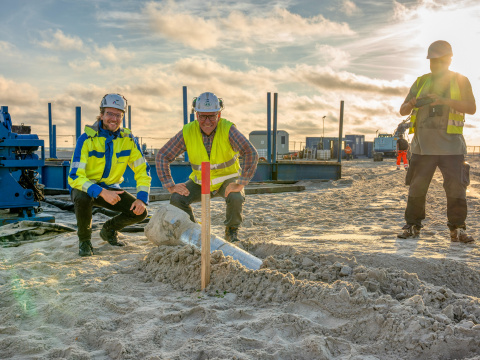 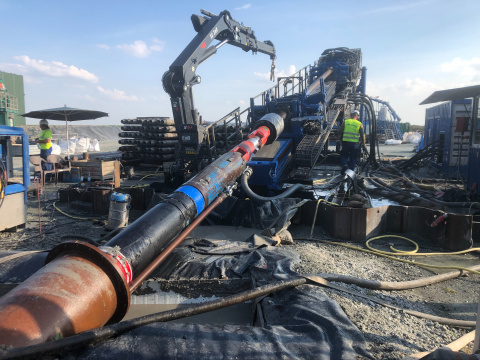 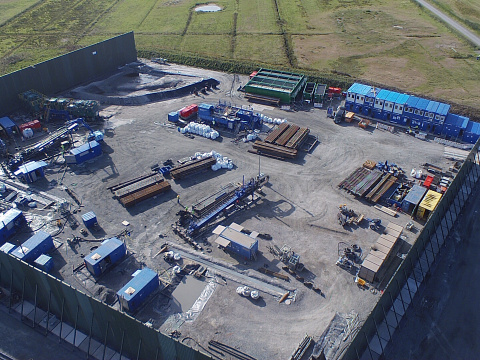 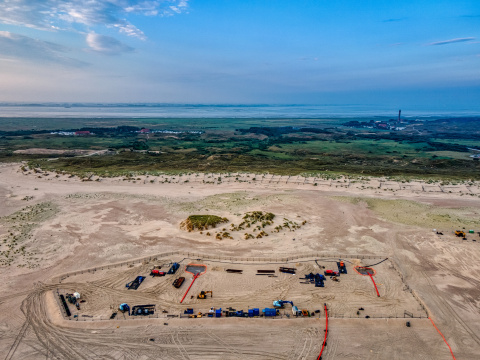 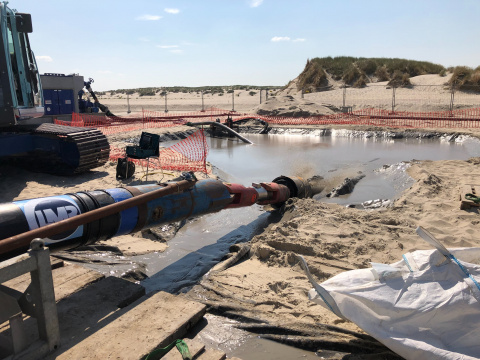 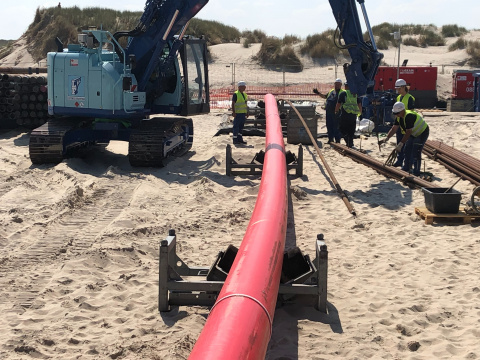